The Consular Office of Japan in Cairns

The Consular Office of Japan in Cairns has set up a new twitter account!
Please hit the follow button for updates on Japan-related news and events in North Queensland.

Consul-General Tanaka and Mrs. Tanaka visited Cairns from March 4th to 6th. Consul-General Tanaka met with Cr. Bob Manning, Mayor of Cairns, Mr. Warren Entsch, Federal MP, Mr. Michael Healy, Assistant Minister for Tourism, Industry and Development and others. During their stay, they visited the Memorial of Ms. Michiko Okuyama and placed a wreath. They visited the Centopah, to pay their respects and then toured the Kokoda Museum at Cairns RSL Club. They also visited the Cairns Japanese Language Tutorial Center and the student hub, taking the opportunity to mingle with students and parents.

On March 5th, Consul-General Tanaka hosted the Emperor’s Birthday Reception in Cairns. He wished for the continued strengthening of our bilateral relations. Many Cairns community representatives attended the reception including members of the Cairns Regional Council, State Legislative Assembly, and members of the Japanese community. The Consul-General’s full address can be found here. During the Reception, Mrs. Sim Hayward, the Ambassador for Cairns Sister Cities and Cairns School of Distance Education were awarded the Consul-General’s Commendation for their contributions to deepening the Japan-Australia relationship and in the case of Cairns School of Distance Education for it’s devotion to Japanese Language Education. 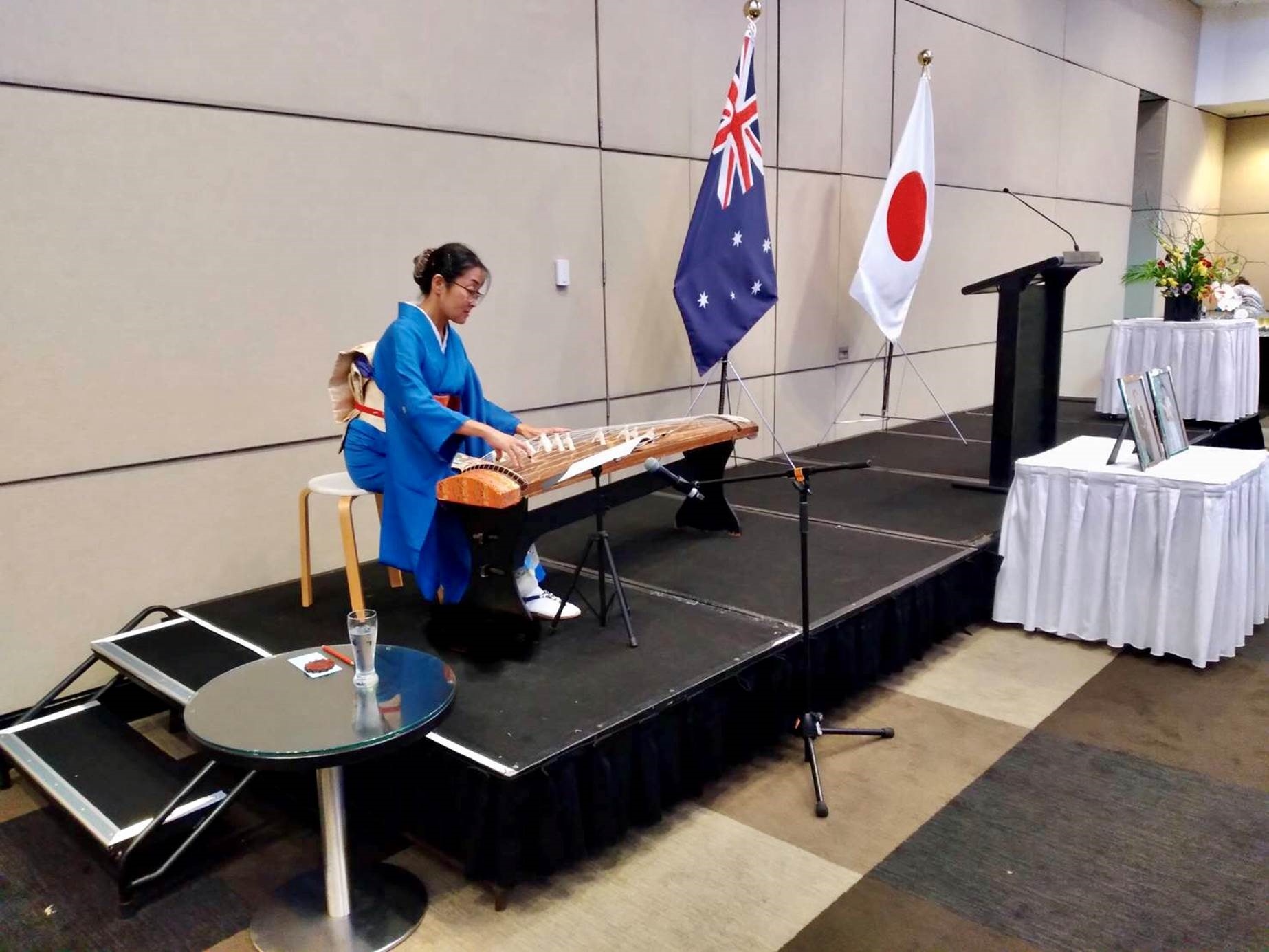 On January 27, Director Uchida visited the Cairns School of Distance Education and met with Principal, Mr. Andrew Oliver and his staff. He also had a conversation with a student learning Japanese over the internet. 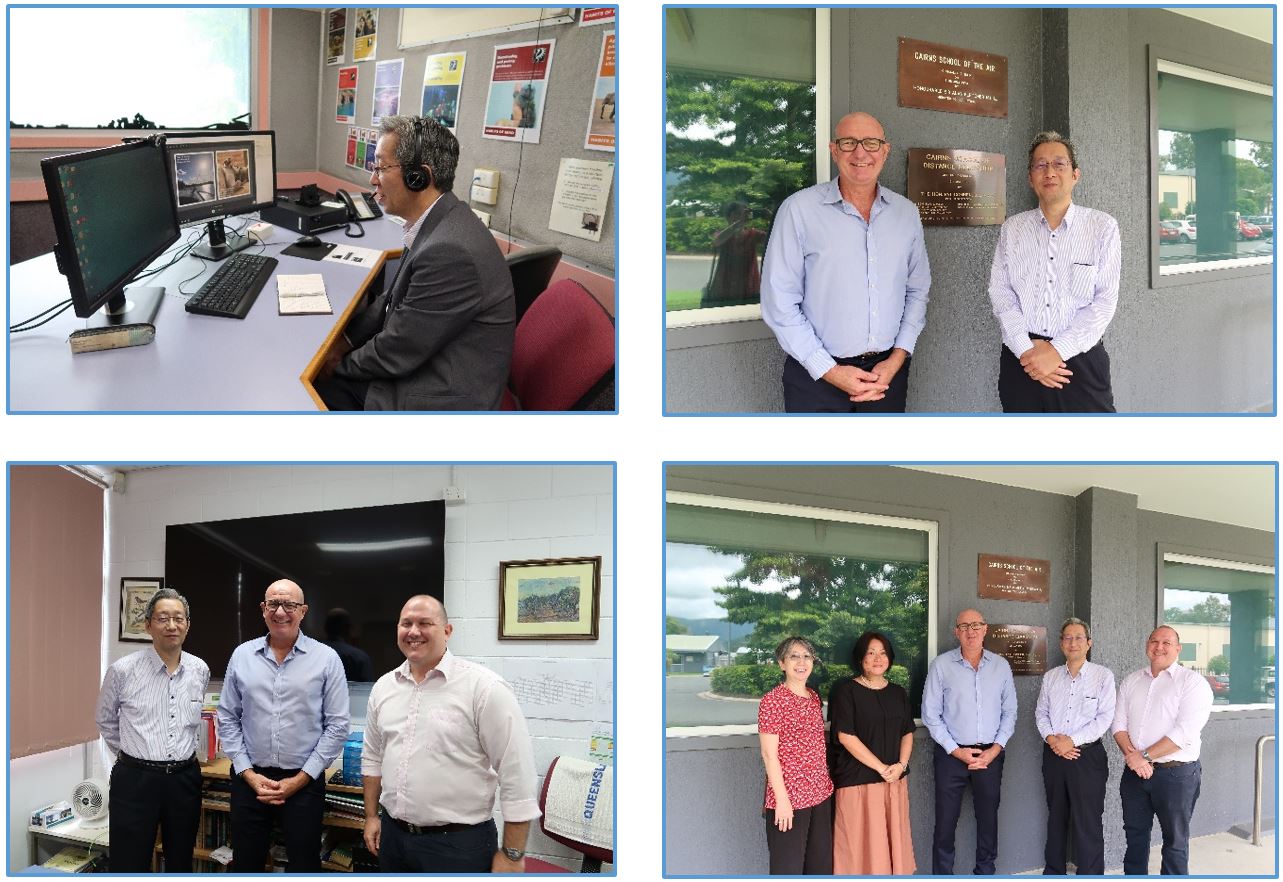 On January 12th, Director Uchida visited Mr. Brian Huxley, Chief Superintendent of the Far North Queensland District of the Queensland Police Service and exchanged views on public safety and the coronavirus situation in the Cairns region.

Director Uchida hosted an origami workshop for Cairns foreign language teachers, on November 27. The group of Japanese, Italian, Chinese and Indonesian teachers, including a number of participants from Distance Education, all enjoyed folding a wide variety of origami together.

From November 3rd and in connection with Culture Day in Japan, the Consular Office of Japan in Cairns is going to have an ‘ONLINE’ Japanese Culture Week, named “FNQ-Japan Week”.
The reason for this, the annual “Cairns Bon-Odori Festival”, one of the area’s most important Japanese cultural events was cancelled this year.
At 3pm every day, for eight days, from the 1st to the 8th of November, we will upload videos introducing Japanese culture.

We hope you enjoy it and pass it on to your family and friends.

Please take a moment to fill in our questionnaire and let us know what you think.
https://docs.google.com/forms/d/e/1FAIpQLSfyf41zlxKNJh5saLl9Cn8ZCCP-7lDjRhShPMmtRa79lnL8ZQ/viewform?usp=pp_url

On October 14, Consul Uchida hosted a workshop at the Cairns Art Gallery, sharing his passion for Origami with a group of more than twenty participants. As part of the event, participants spent an enjoyable evening folding origami and contributing to a joint artwork that culminated in the creation of a Bascetta star (as pictured). 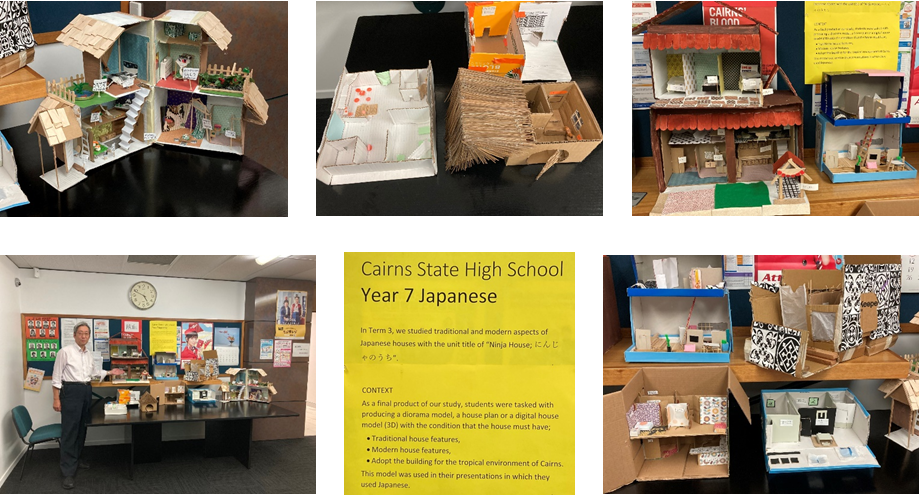 Commemoration of the 75th Anniversary of the United Nations

The Country Women's Association, Atherton Tableland Division, held an International Day event on August 7. Their country of study for this year is "Japan". The event included a koto performance of traditional Japanese music pieces by a local Japanese resident, a kimono display and the opportunity to sample a variety of Japanese food, including desserts prepared by a Japanese sweets artisan. In support of this event, the Japanese Consular Office in Cairns provided a delightful display of origami works and a number of informative pamphlets introducing Japanese culture.

On June 30th, Director Uchida paid a courtesy call on Member for Leichhardt, The Honorable Warren Entsch. There was an exchange of views on the recent COVID-19 pandemic, the outlook for Cairns tourism and the ongoing deepening of friendly ties between Japan and Australia. 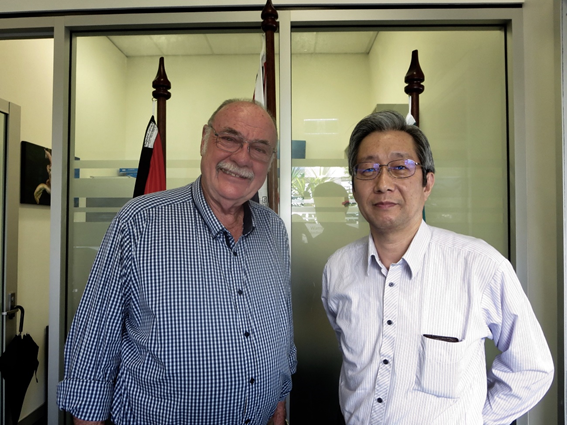 On March 4th, students from the Cairns State High School visited the Consulate Office of Japan in Cairns. Director Uchida briefed the students on diplomatic and consular business issues and had fruitful discussion on various matters.

On February 29th, Consul-General and Mrs. Tanaka visited the Cairns Japanese Language Tutorial Centre, observed the class and mingled with the students. They also met with the Principal and Members of the Board to exchange views on the school’s ongoing progress.

On February 28th, Consul-General Tanaka hosted the Emperor’s Birthday Reception in Cairns; the first in the Reiwa era. He wished for the continued strengthening of our bilateral relations and made loyal toasts together with Cr. Bob Manning, Mayor of Cairns, for the future development of the two countries. Many Cairns community representatives attended the reception including members of the Cairns Regional Council, State Legislative Assembly, and members of the Japanese society. The Consul-General's full address can be found here

From 27th to 29th February, the Consul-General and Mrs. Tanaka visited Cairns and met Cr. Bob Manning, Mayor of Cairns, Mr. Michael Healy, MP (ALP) for Cairns electorate, and Superintendent Geoff Sheldon, Acting Chief, Far Northern District, Queensland Police Service. During their stay, Consul-General and Mrs. Tanaka visited the Memorial of Ms. Michiko Okuyama and the Cairns Japanese Language Tutorial Centre. At the Centre the Consul-General took the opportunity to mingle with students. On the 28th, Consul-General Tanaka hosted the Emperor’s Birthday Reception and interacted with Cairns community representatives, strengthening the strong foundation of lasting friendship between the people of Japan and Cairns.

On February 10th, Director Akira Uchida paid a courtesy call on Cr. Bob Manning, Mayor of Cairns Regional Council. They discussed the strong relationship between Japan and Cairns and exchanged views on how they may continue to deepen these ties in the future.

Director Uchida also took the opportunity to bring the recent bushfire fundraising efforts of the local Japanese Community to the attention of the Mayor.

On February 10th, Director Akira Uchida, paid a courtesy call on State Member for Cairns, Mr. Michael Healy. The frank discussion between the two individuals focused on the importance of strengthening economic relations between Japan and Cairns, on the promotion of tourism and on the importance of fostering friendship between Japan and Australia. The significant benefits of Sister City agreements were also discussed.

Director Uchida made mention of the recent fundraising activities conducted by the resident Japanese Community and in addition discussed the Japanese Government’s efforts to support Australia during the recent bushfire events.

The Consular Office of Japan in Cairns

The Consular Office of Japan in Cairns was established in 1997 and is the Japanese consular/diplomatic mission responsible for overseeing the relationship between Japan and North Queensland. It serves the interests of Japanese nationals living in North Queensland and offers assistance to Australians who seek to visit or learn more about Japan.

The Consular Office is divided into:

Postal Address
(Please use this address for mailing purposes. As our office is in a building with many tenants, to avoid incorrect delivery of mail, it is preferable that mail is addressed to our post office box, instead of our physical location.)